What is Purple Day for Epilepsy? 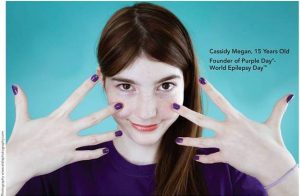 Purple Day for Epilepsy was founded in 2008 by nine year-old Cassidy Megan of Nova Scotia. Motivated by her own struggles with epilepsy, Cassidy started Purple Day for Epilepsy in an effort to educate others about the disorder, and remind those living with seizures that they are not alone. She named the day after the internationally recognized colour for epilepsy, lavender. Each year, on March 26, people from around the world wear purple in support of epilepsy.

Why is Purple Day for Epilepsy important?

Epilepsy is one of the most common neurological disorders, affecting approximately 1 in 100 people in Canada and 50 million people worldwide (more than multiple sclerosis, cerebral palsy, muscular dystrophy and Parkinson’s disease combined). Despite its prevalence, epilepsy is often misunderstood and people with epilepsy can face social stigma and discrimination. Purple Day will help epilepsy organizations in Canada and around the world increase awareness, reduce stigma and empower individuals living with epilepsy to take action in their communities.

Who participates in Purple Day for Epilepsy?

Purple Day was launched nationally and internationally by the Canadian Epilepsy Alliance. The Anita Kaufmann foundation joined as a partner in 2009. All over the world people organize special events and wear purple to let those living with epilepsy know they are not alone.

What can Purple Day for Epilepsy achieve?

Purple Day reminds everyone that people living with epilepsy need understanding and acceptance, and deserve comprehensive care and access to innovative treatment options to effectively manage their disease. Spreading the word about epilepsy will help dispel myths and remind people affected by seizure disorders that they are not alone. On March 26, people around the world are encouraged to support epilepsy by wearing purple or by hosting a Purple Day awareness or fundraising event.

Purchase a limited edition of Purple Sweet Things on every Tuesday of March and a portion of the proceeds will go towards our direct client support services.

In support of Purple Day, on the evening of March 26th, City Hall was lit up purple to show support and spread awareness for all those impacted by epilepsy and seizure disorders. 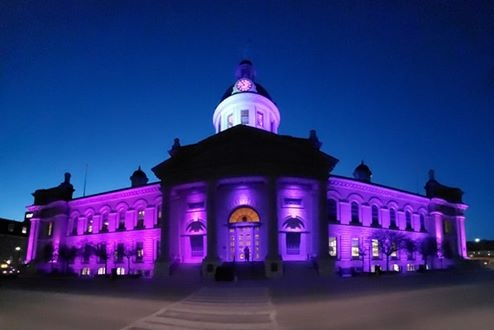 ESEO had an Epilepsy Information Kiosk at the Kingston Frontenacs Game on March 15th at 7pm when the Frontenacs took on the Oshawa Generals! Tickets were 15$ each and the Kiosk helped promote Epilepsy Awareness Month.

ESEO hosted an online auction on our Facebook Page starting in March to raise awareness for epilepsy! The blanket was handmade by a local artist and the bid will start at $25. 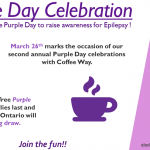 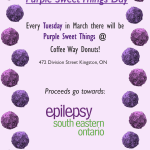 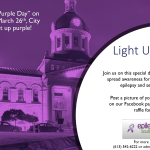 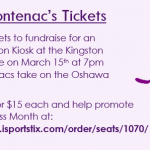